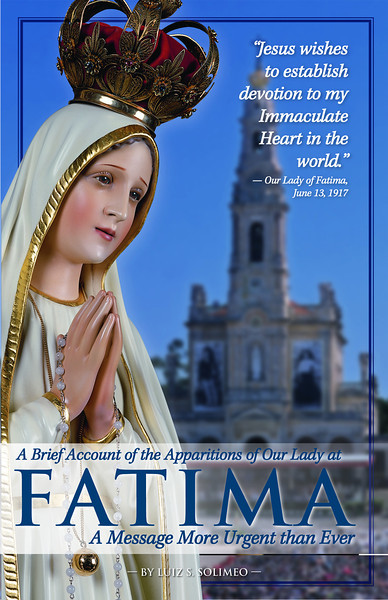 In Fatima:  A Message More Urgent than Ever Mr. Luiz S. Solimeo offers the reader a concise, attractive story of the apparitions of the Mother of God to three shepherd children during the First World War. In these visitations, Our Lady not only revealed that the war was a chastisement for a sinful world, but also foresaw the advent of another war in case mankind did not amend its ways by attending Her requests for prayer, penance and the Consecration of Russia to Her Immaculate Heart.

While mankind did not heed Our Lady’s entreaties and World War II did break out as predicted, the Fatima message still contains the means for conversion for our times. Our Lady further points out Communism, “the errors of Russia,” as the poison that will be the cause of so much suffering and destruction in the world.

In Fatima: A Message More Urgent than Ever, the author explains with great clarity what errors are contained in the Communist philosophy and makes it clear why the Mother of God was so concerned by its dissemination.

Our Lady promised Lucy, the oldest seer, that She would be ultimately victorious over Her Divine Son’s enemies and affirmed, “In the end, My Immaculate Heart will triumph.”

Other chapters of special interest that make this book unique are “Christian Life in a Portuguese Village,” “A Secret and a Miracle,” “The Saving Message,” “A Sign of Contradiction,” “Expiatory Victims”and much more.

If you believe this is the most important of all messages for our times, order a copy for you, your family and your friends without delay and join the Lady of the Rosary in spreading Her saving message.

*This offer is available ONLY for Canadian residents.